Two years since the earthquake, the Visit Japan Project’s new developments to commemorate its 10th anniversary 「DISCOVER the SPIRIT of JAPAN」

○ With the Visit Japan Project marking its 10th anniversary in April, Japan Tourism Agency and JNTO undertake a radical change in its overseas promotions.

○  Taking into consideration the "Three Core Values of Japan Tourism" compiled by 11 Advisory Committee  members, including eight foreign members from six countries, we have renewed our PR videos, website and guidebooks to place “the people of Japan" at the forefront.

○ The Primary Video that will be provided in 17 languages, will be based on the theme of "DISCOVER the SPIRIT of JAPAN" and will introduce the "Awa Dance", a festival known as one of the world's best, comparable to the Carnival in Rio. It will represent the pleasant and passionate "Japanese people."

○  The newly created website, www.visitjapan.jp, will have available a total of over 160 videos (Primary Video, Themed Videos, Regional and Tourist Attraction Videos, and more). It aims to aid individual tourists, a category of tourists that we expect to increase, discover a yet "Undiscovered Japan."

○ In principle, all users will be able to freely download the Videos and we aim to have numerous individuals and organizations, besides Japan Tourism Agency, create and distribute Videos on Japan. As the first activity, we have partnered with eYeka of France to hold a contest for Videos on Japan created by foreign creative artists and others. 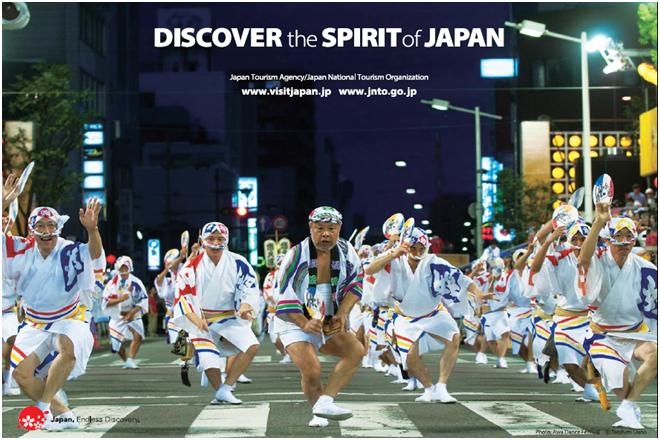 *The Advisory Committee Report is currently in its final preparations and expected to be disclosed within this fiscal year.

Japan Tourism Agency had recently been engaged in creating new content (Videos, Guidebooks, Website) (Attachments 3 through 5) based on the abovementioned "Three Values" and the advice of the Advisory Committee in order to commemorate the 10th anniversary of the Visit Japan Project. We are proud to be able to show these to you today.

Today at 15:00, we will hold a presentation event with 48 members of the press from 30 foreign companies. This will mark the beginning of the use of this content as the platform for the various Visit Japan Projects starting in 2013.

→Please see the following site for the main promotion video and new website.